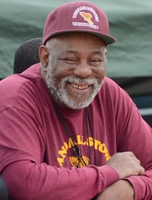 Felix Albert Rogers was born on December 27, 1949, in Decatur, Alabama. He was the eldest child of Felix Minor Rogers and Estelle Doris Rogers (née Holmes). Albert (as he was known in his early years) attended Cherry Street Elementary School in Decatur, Alabama; Central Junior High School in Zion, Illinois; and Zion-Benton High School in Zion, Illinois. Albert found joy in participating in track and field as a high school student. He ran the half mile and the mile, and also competed in the high jump. He majored in computer science while he attended California State University Northridge; University of Chicago Circle; and The College of Lake County. As a young man Albert continued his passion for running by competing in half marathons. Throughout his career as a computer scientist, Felix worked for several corporations including Thompson CGR Group, Environmental Elements Corp, Litton Amecon, and Northrop Grumman. While in college at CSUN Felix met Ophelia Curry. On December 27, 1976 they got married in his hometown of Zion, Illinois. Soon after they welcomed Malika, then Benjamin into the family. After moving to Maryland, baby Mercedes was born. As track and field coach and meet director, Felix dedicated his life in service to America's youth athletes. The key to his philosophy for teaching, molding, and inspiring the young athletes in his care, was his insistence that they strive for mastery in every human endeavor, not only in sports but in life. Since the 1980s, Felix oversaw the Randallstown Track Club, along with Assistant Coach Kelvin Taylor. There, and for the next 35 years, Felix distinguished himself as a beloved mentor, coach, and official through his involvement in AAU, USATF, and Baltimore County Parks & Recreation. Felix took his role of training youth track athletes seriously. He obtained several advanced national level certifications with the USATF organization. In 2006, he was elected as District Director for Maryland AAU Track & Field, a position he held since then. For his continued dedication and immense contributions to Maryland area youth athletes, Felix was honored in 2018 with the Volunteer of the Year Award and the National AAU Volunteer of the Year Award for the Maryland District AAU. The award was created to recognize those outstanding volunteers whose unselfish and dedicated service to their sport, the district, and overall organization of the AAU, has made a significant difference and impact on America's youth athletes. His is a legacy of service and achievement that is unparalleled. Felix Albert Rogers transitioned on January 21, 2021, in his Baltimore home. He is survived by his loving wife Ophelia Rogers; children Malika Rogers, Benjamin Rogers (Elizabeth Vazquez), and Mercedes Rogers; granddaughter Arianna Rogers; siblings Charles Rogers (Ramona Rogers), Bernard Rogers (Machella Rogers), Leland Rogers (Jennifer Rogers), Dorice Pierce (Robert Pierce), Geoffrey Rogers, and Alphonso Rogers (Deborah Rogers); and a host of cousins, nieces, nephews, relatives, friends, acquaintances, athletes, and colleagues Calling hours will be Friday, February 12, 2021 from 4:00-7:00PM at Vaughn C. Greene Funeral Services, 8728 Liberty Road, Randallstown, MD (21133) On Saturday, February 13, 2021, Services for Mr. Rogers will be held at Vaughn C. Greene Funeral Services, 8728 Liberty Road, Randallstown MD (21133) at 10:00AM.