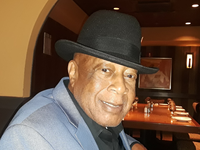 ROBERT L. HOLT, the eighth child of ten, born on May 4th, 1936 to the late Walter Scott Holt and Florence Pugh Holt in Baltimore, Maryland, departed this life on June 21st 2020. He was affectionately known as "Kingsize", a nickname given to him in high school. He was an avid athlete who enjoyed playing baseball and football in high school, the marines and later as a hobby with his friends. He graduated from Paul Laurence Dunbar High School in June 1954 and remained a Poet until the end. He later became the alumni president of his class. Robert joined the United States Marine Corps where he attained the rank of Sergeant. He worked as a Communications Operator and was a member of the elite HMX-1 Unit that traveled with the President of the Unites States. He would often tell his family of the experience of flying with former President Eisenhower in a helicopter, and how he mastered Morse Code. After being honorably discharged from the Marine Corps after 4 years of service, Robert worked at the Lockheed Martin Corporation before passing the exam to become a Baltimore City Firefighter. He rose to the rank of Captain in the Fire Prevention Bureau. He retired from the Baltimore City Fire Department in 1995. Robert entered into holy matrimony with Eleanor Swann on November 9th, 1962. From this union, two children were born, Robin Kelli Holt and Retired Sergeant Major Scott Christopher Holt. Robert was a founder and active member of the Poet's Athletic Club and the Vulcan Blazers of Baltimore City. He enjoyed spending his weekends umpiring and coaching softball, basketball, and flag football. Robert attended Baltimore City Junior College and earned a certificate in Information Technology. He then attended the University of Maryland where he received his Bachelors' Degree in 1983. Robert enjoyed farming at his home in Buckingham County, Virginia, and had gardens located at an East Baltimore neighborhood plot and in the backyard of his home in Baltimore City. Neighbors and Morgan State University students would often stop by and pick fresh vegetables. He also enjoyed fishing and yearly trips up north to fish for salmon.